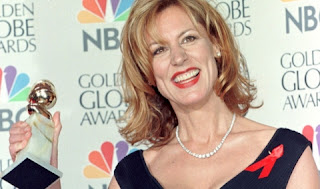 
PASADENA, Calif. -- "Chicago Hope," arguably CBS' finest new show last season, survived its bruising loss to NBC's "ER" on Thursdays last fall by moving to Mondays, where it finally found that elusive audience. As this season begins, "Chicago Hope" (tonight at 9 on KUTV Channel 2) takes another one on the chin with the departure of its nominal star, Mandy Patinkin (Dr. Jeffrey Geiger), who will exit the show after eight episodes.

Some creative teams might panic, and go hunting for an actor to pick up where Patinkin left off. Not executive producer David E. Kelley, who appears to be headed down an altogether different highway by hiring Christine Lahti to replace Patinkin.

"I heard Mandy was quitting," Lahti said, during a cocktail party on the lawn of the Ritz-Carlton Huntington Hotel during the Television Critics Association Summer Press Tour. "And a girlfriend called and said, 'Why don't you replace Mandy in "Chicago Hope"?' They were thinking of replacing him with a man. I called my agent, my agent made some calls and suddenly they took the ball and ran with it."


Lahti, a film actress ("The Doctor," "Running on Empty"), will play cardiothoracic surgeon Kathryn Austin, a much more upbeat character than Geiger.

"I know a little bit about her," Lahti explained. "She's from a small town in rural Illinois, her dad was a vet, her mom was a mom and raised six kids, she went to medical school on scholarships, maybe she entered local beauty pageants. She's not from a privileged background at all. She's not tortured; she's life-affirming, funny, hopefully sexy, she's brilliant and she's walking into a boys' club, so there's a lot of room for interesting sexist things."

The casting change was greeted with great enthusiasm by another female cast member, Roxanne Hart, who plays nurse Camille Shutt on "Chicago Hope."

"I think it's really terrific that Christine's coming on, and that she plays a really strong female surgeon," Hart said. "I think last year it was really very male, and I think this year it's going to have a different feel. And the male characters are going to be better served. I think for a male or female character to be served, you've got to have the input of the greatest amount of reality you can have -- especially on the long haul of 22 hours of writing that has to be done in a season. You need the widest spectrum of sensibility you can get.

Lahti said she was offered the TV version of "The Client" this year, "but I didn't want to do that because I would've had to be in it every single second. I'm happy that ('Chicago Hope') will be an ensemble."

Last but definitely not least, she  said, was the quality of the scripts on "Chicago Hope": "It's the best writing I've ever seen. Ninety-nine percent of the feature film scripts that I'm reading, David Kelley far surpasses that kind of writing."
Posted by Don at 7:45 AM