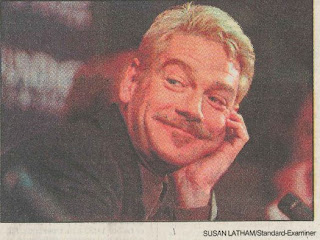 They were swarming like hungry locusts Thursday night at Sundance's opening night premiere of "A Midwinter's Tale," the latest from writer-director Kenneth Branagh ("Henry V," "Much Ado About Nothing"). The festival commandeered the whole Crossroads Cinemas and much of the adjoining Marriott Hotel's ballr00ms to celebrate the festival's 11th year under the direction of Robert Redford's Prov0 Canyon-based Sundance Institute.


Branagh and a few members of the film's cast were on hand. The British filmmaker was fresh off the plane from England, where he's directing a three and a half-hour film adaptation of Shakespeare's "Hamlet."

"It was great coming in here today," Branagh told the audience in one of the theater's three auditoriums, setting up for a punchline: "The weather reminded us of England in the middle of summer."

"A Midwinter's Tale" is a seriocomedy about a passionate actor attempting to stage a low-budget, offbeat production of "Hamlet" in a dreary English church. In the film, the talent of all the cast members is suspect and so many personal crises emerge, everyone begins to wonder whether the show will actually open on schedule.

"This (film) has much autobiography in it, I suppose," Branagh said during a press conference before the premiere. "I think we've all been involved in low-budget Shakespeare, and done it in some very strange places. I remember playing 'King Lear' one night in a tent in the eastern part of Great Britain, which was on the same night as the semi-finals of a World Cup.

"The English team was in the semi-finals, and it had gone to extra time and penalties. And there were about seven people in watching the play, and one of them had the radio on listening to (the match), which was quite distracting. …

"My experience is that the more serious the endeavor, if it's some great Shakespearean tragedy, (it) often produces humor not necessarily appreciated by the people who are involved."

Explained Geoff Gilmore, the festival's director of programming: "We chose this film because we thought it was so much about art, about humor and about the position so many of the independent filmmakers have to face, as well."

Indeed, Branagh is the epitome of a filmmaker who slides well, and frequently, between the worlds of commercial movies -- having directed "Dead Again" and "Mary Shelley's Frankenstein" for Hollywood studios -- and the more risky Shakespeare adaptations.

Branagh said the festival, as an event, is well covered in the world press. "A lot of the pictures that come out of Sundance I certainly end up seeing, and am interested to see," he said. "We felt very honored to be asked (to open the festival), in all honesty."

The festival's cachet among the world's entertainment media and the film industry at large cannot be underestimated. During the past several years, it has been widely recognized as the most important festival of independently financed -- or non-studio -- film in the country.

This year, the Los Angeles Times decided to take the plunge and described it as "the preeminent American film festival, period."

Hollywood talent agents and movie company executives descend on Sundance with such fury because it represents a fairly small, highly accessible orchard in which to pluck fresh, inexpensive talent. Moviegoers love it because Sundance provides a clear alternative to the assembly-line product of Hollywood studios and the grotesquely expensive, often mindless motion pictures that routinely occupy the nation’s multiplexes.

Which is not to say the bulk of films screened at Sundance are better than studio pictures, per se, but they are something completely different, made by writers, directors and actors – sometimes for as little as $7,000 or as much as a few million dollars -- who are passionate about their work.

The Sundance Film Festival continues through Jan. 28.
Posted by Don at 9:54 PM