I also wrote features in between the movie reviews and columns

May 10, 1987
By DONALD PORTER
Standard-Examiner staff
If man's best friend is his dog, how might his mother-in-law be described?

Popular stereotypes certainly hold that mothers-in-law are a bane to happy marriages -- an anathema, in fact -- and a nuisance at best, always interfering and dishing out unsolicited advice.

In reality, though, mothers-in-law might be getting a bad rap. At least that's what Betty P. Janiak, an Ogden psychologist who has experience sorting out such problems, says.

"I wouldn't say that (mothers-in-law) are the primary problem" in conflicts between married children and their in-laws, Janiak said. "A lot of the time adult children have trouble separating from their parents emotionally.

The Paramount logo and Mt. Ben Lomond: facts and myths

Recently, a local TV show attempted to discover whether the voice of God in "The Ten Commandments" was dubbed by a Utah man. It seems the story has been circulating in the state for years, yet no one has been able to provide any evidence to establish the myth as fact or fiction. The man in question is dead, and all that remains is hearsay.

Well, I love a good story -- especially when it concerns the movies. One I've heard repeatedly since I took over the movie beat at this newspaper concerns Ogden's connection to the Paramount Pictures trademark. People keep telling me that the logo -- a mountain peak circled by stars -- was patterned after Ben Lomond Peak.

These aren't exactly crackpots, mind you. People at the National Western Film Festival love to tell the story, and a lot of folks have traced Paramount's business history (rather inaccurately in most instances) in support of the Ben Lomond connection. Why, even Gedde Watanabe -- the Ogden native who's gone on to act in films -- said he heard the story from a crew member while starring in "Gung Ho" (a Paramount film).

Working at a down-market newspaper in the 1980s, an entertainment writer was largely at the mercy of studio field reps for access to actors and filmmakers. In my case, I would deal with PR folks in Denver, Salt Lake City and Dallas who were employees of ad agencies in those cities who had contracts with the major studios -- and some independents -- to promote their films. Once in a while, I'd do someone a favor with the unspoken (usually) agreement that if I'd help them out by doing an interview with someone I wasn't really interested in, they'd return the favor by putting me on the list for a higher-profile interview that I'd otherwise get at some point down the road. Such was the case with this interview. I remember it because the rep in Denver just pleaded with me to do it. And do it I did.

The subject of the interview, Michael Anderson, went on to work a lot. He was the "man from another place" in David Lynch's "Twin Peaks," and in fact worked on Lynch's "Mulholland Dr.," as well as lots of other episodic television series and  supporting roles in movies.

In a business known far and wide for its discriminatory hiring practices, Michael Anderson is an anomaly. The 3-1/2-foot-tall actor is the star of the a new movie, "The Great Land of Small."

Think about it. When was the last time you heard about an actor filing a lawsuit because his physical attractiveness was judged to be unsatisfactory? The movie business is tough, and actors get parts based on how they look as often as how talented they are. Anderson, a Denver native, decided his small stature wasn't a hindrance to an acting career -- it was a plus.

"The idea of trying to be normal isn't normal," Anderson said by phone from Denver last week. "I decided to take advantage of my unique appearance."

It is remarkable to me that in the waning years of John Huston's life, as he was stricken with emphysema and other ailments, that he continued to make films --great films -- as if the process of continuing to direct motion pictures would keep him alive forever.

It's too bad the work wasn't enough to sustain him, because the motion picture industry lost a giant when, Huston died in his sleep last week. He was a hard-living man who had experienced a great deal of pain and heartache -- he was married five times -- along with his amazing success. He made films that were honest and entertaining, mostly, but he directed his share of bombs, too. He was an imposing figure, standing tall and equipped with a booming voice, and actors respected him because he respected them. 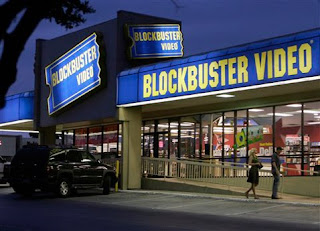 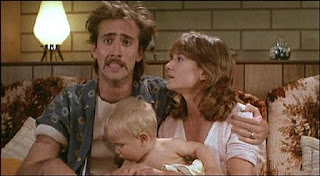 (Little did I know when I saw "Raising Arizona" what affection I would develop for the films of Joel and Ethan Coen over the coming decades. They are amazing talents. I don't much care for the writing in this review, but it is what it is -- and kind of fun for me to notice the talents of actors who went on to even greater prominence.)

"Raising Arizona" is a very odd movie. But it's an extremely funny one, too, a quality that's directly related to its endearing weirdness.

A point also worth noting is that many of the laughs are snatched from the clutches of a decidedly somber topic: child kidnapping. It's all done with oodles of irreverence and a great deal of skill, though; so much so, that you rarely consider the darker side of the action. This is flat-out entertainment, and tromps on things American society holds dear, like the importance of the family unit and a system based on law and order.

Written, directed and produced by Joel and Ethan Coen ("Blood Simple"), "Raising Arizona" turns the world upside down and shakes it to see what comes loose.

H.I. (pronounced "Hi") McDonnough is a recidivist holdup man who used to knock-off convenience stores with unloaded guns. His wife, Ed (short for Edwina), is a former cop. H.I. first met her as he passed through the booking process at a county jail.

I junketed to San Francisco during the summer of 1987 to interview Kim Basinger, Jeff Bridges and Robert Benton for the action-comedy "Nadine." Here's the resulting story from the Basinger interview. 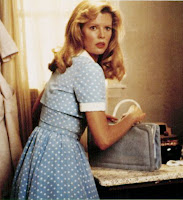 Aug. 7, 1987
By DONALD PORTER
Standard-Examiner staff
SAN FRANCISCO -- An occupational hazard of a career in journalism is that most reporters are called upon to complete extremely boring and mundane tasks on a regular basis.

Interviewing Kim Basinger, however, isn't one of them.

It's not that the actress happens to be astonishingly beautiful, although she is. Instead, it has more to do with her surprising candor and humorous approach to virtually every topic of conversation. When she's asked a question, she answers. And that, folks, is a rarity in the motion picture business.

Basinger was in San Francisco recently to promote her new film, "Nadine," which was directed by Robert Benton ("Kramer vs. Kramer," "Places in the Heart") and co-stars Jeff Bridges ("Jagged Edge"). "Nadine" is a departure for Basinger, since she's the undisputed star of the film. In past movies -- "The Natural," "Never Say Never Again," "The Man Who Loved Women," "9 1/2 Weeks" and "Blind Date" -- she played doormat roles that took a back seat to male leads.

In 1987, I flew to San Francisco to interview the principals on "Nadine," which, given its pedigree, was expected to be a big hit.  Writer-director Robert Benton had an amazing filmography writing screenplays for "Bonnie and Clyde," "What's Up, Doc?" and writing and directing "Bad Company," "Kramer vs. Kramer" and "Places in the Heart," the last two of which earned lots of Oscar nominations and wins.

"Nadine" was a comedy starring Kim Basinger and Jeff Bridges, both of whom were there for interviews along with Benton. The director made more great ones afterward, including "Nobody's Fool" and "Twilight" (no, not the teen-vampire film).

"Nadine" didn't score much of a hit at the boxoffice, but the interviews turned out well, I thought.

SAN FRANCISCO - It's plain to see that Robert Benton is a nice guy. A really nice guy. He might have made a good priest, listening to people's problems and making them feel good about themselves.

A colleague suggested that Benton is probably too nice a guy to be working in the motion picture business, long known for its back-stabbing modus operandi. He may have been right, but thank heavens we have Benton to make movies for us -- religion has claimed enough of the good-hearted people in the world.

As filmmakers go, Benton is unique in his ability to tell basic truths about human relationships, and to do so without the gadgetry and pomposity other directors employ. He has written and directed -- among other films -- "Kramer vs. Kramer," "Places in the Heart" and his newest, "Nadine." Always, his characters are human, recognizable.

SALT LAKE CITY -- Looking as if he might have just slid off a stool at the pub, Michael Caine takes a seat for a trans-Atlantic satellite teleconference to promote his new film, "Mr. Destiny."

Salt Lake City is the latest city to link up with the London studio where Caine is seated, and he asks in a pleasant, vigorous voice if everyone on the other end is feeling all right.

In "Mr. Destiny," Caine plays what he describes as a "fixer," an angel -- albeit a "tarnished" one -- who comes into the life of a sporting goods executive to allow him to change his destiny by reliving a pivotal event from his past and dealing with the consequences.

"This one isn't even a leading part," Caine says, hands clasped in front of him as he sits behind a white-topped table. "'It was just a three-week guest shot because I wanted to do it. ... I haven't worked since last March. And I have nothing that I've found I want to do. So you probably won't see me in another film until probably next October."