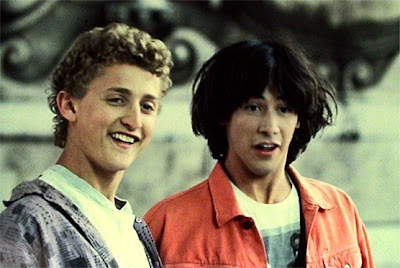 
The only solution is if Ted -- with the help of Bill -- can score an A-plus on his final oral report for history. At first it looks pretty grim, man. But then this totally bodacious guy named Rufus drops by the parking lot of the Circle K and offers Bill and Ted the use of his time machine, which looks just like a phone booth.

So Bill and Ted, like, go back in history to bag all these famous dudes so they can bring them to San Dimas and pass the exam. Some guys are pretty sedate, like Billy the Kid and Socrates and Abe Lincoln. But others, man, are supremely gnarly: Napoleon Bonaparte makes an ass of himself at the bowling alley, Genghis Kahn drinks toilet water and Sigmund Freud is always hittin’ on the babes.

The reason this movie is, like, so cool is that Bill and Ted never fully realize the awesome opportunity they’ve been given. Before they trip off in the phone booth, they think Caesar is, like, a salad guy and George Washington is, like, that dollar-bill guy and Marco Polo is just a water sport, dude. They bag all these historical figures just to pass the class, man, not to increase mankind's knowledge of the past.

Sure, there are some audaciously dumb scenes. But most of it is, like, really funny. Keanu Reeves, the laid-back dude from “River’s Edge,” and Alex Winter are quite excellent as Ted and Bill. And even that old comic dude, George Carlin, is most humorous as Rufus the time travel guide.