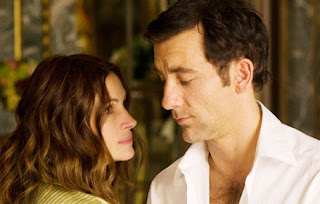 (Review first appeared in the April issue of the Ogden Independent.)


In the 1940s and ’50s, they made movies the equal of “Duplicity” all the time: sparkling dialogue, crackerjack plotting, memorable acting. But it’s been so long, maybe the biggest surprise “Duplicity” offers is that a film this good can still make it through the Hollywood meatgrinder and emerge intact.


The movie’s plot is too dizzyingly complex to describe is this space. Just know this: One consumer-products company hopes to steal a secret formula for a lotion – or is it a cream? For the purpose of this story, that’s an important distinction – from the other, and is willing to spend whatever it takes – think: AIG bonus money – in order to make it happen.


Julia Roberts and Clive Owen play ex-government spies-turned-corporate-black-baggers. Their respective dark-ops teams have the task of making the theft happen, preventing it … or not. Right up to the end, we’re not really certain.

And that’s the perverse joy of “Duplicity”: The suspicion among all characters runs bone-deep. “Duplicity” earns its name, since no single individual in the film ever trusts anyone else. It’s amazing, really, that writer-director Tony Gilroy can wring sympathy from such a collection of cynics and double-dealers. But he does.


That, of course, does not owe simply to great writing and direction. You need talented actors to sell it to the audience. And here, there are plenty. Gilroy, whose debut as a director, “Michael Clayton,” was another terrific wallow in the corporate sleaze, has hired a first-rate supporting crew. (Gilroy also wrote the screenplays for “The Bourne Identity” and its sequels.) As in “Michael Clayton,” Gilroy has enlisted Tom Wilkinson, this time playing a corporate throat-slitter opposite Paul Giamatti. The two run rival business behemoths, and aren’t above physical confrontations – an example of which plays hilariously over the opening credits.


Employing a heavy dose of time-shifting, even more so than he did in “Michael Clayton,” Gilroy jumps back and forth over months and years, weaving a complex but sturdy web of deceit, saturated with romance, dark comedy and bitter complaint. This is snappy filmmaking that assumes the audience can keep up.


As the opposing corporate spies do their dirty work – Roberts on Wilkinson’s team, and Owen on Giamatti’s – it’s great fun to witness the manipulation and craftiness. We’ve seen this in other movies, yes, but rarely at this level of sophistication.


For example, the different way Gilroy spins the romance: Roberts and Owen are hot for each other, sure, but maybe they’re hotter for the money they could grab if they team up and the scam goes just right. Then again, how do they make it work if they can’t trust each other? This game is played with an edge uncommon to contemporary filmmaking – these people are thoroughly dishonest, all of them – and it loads “Duplicity” with a feast of surprises.


It’s worth mentioning, too, that all the performances are praiseworthy – not exactly shocking given the skills of these pros. Still, this is arguably the best work we’ve seen from Roberts, whose clever choices bring a heretofore unseen depth to her portrayal. She has a few magical scenes, with her face telling stories we’ve never seen before; her years away from starring roles have served her well.