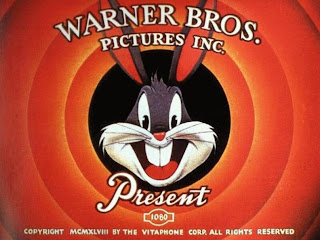 On the occasion of Bugs Bunny's 50th anniversary, I wrote a feature page cover appreciation of my favorite cartoon character. One of our staff artists, Larry Stephens, drew a great Bugs in a trenchcoat, looking very much like Humphrey Bogart -- cool. We decided to run it by Warner Bros. since Bugs is trademarked and the studio warned us against using it -- because Warren Beatty's "Dick Tracy" was coming out and they thought it looked like something from that film. So we used some WB stock art instead. After the thing was published, I sent a clip to the WB press people as a courtesy, and they were so thrilled with it they had it cleaned up from the newsprint version on beautiful white Velox paper and sent me back a rolled copy suitable for framing.

They say Bugs Bunny turns 50 this year. Which is like saying the Bible is a thick book -- it simply doesn't begin to tell the story. Bugs Bunny is ageless, so his being 50 years old is irrelevant -- except that it gives us one helluva good excuse to think about him.

So, on Easter Sunday as bunnies come to mind, let's do just that: Picture ol' Bugs in your mind. What do you see? Maybe he's casually nibbling a carrot and asking, "What's up, Doc?" while Elmer Fudd's double-barreled shotgun rests on the bridge of his nose. Or he has Yosemite Sam in such a snit that the mustachioed hothead is bouncing up and down on the heels of his boots like a superball on concrete. Or perhaps Daffy Duck is trying -- in eternal futility -- to outwit that wascally wabbit.

Whatever image springs to your mind, one thing's certain: You are smiling. It's impossible to ponder the Bugster and not smile. Einstein proved that; look it up.

Nobody ever gets the best of Bugs, because even in defeat -- which is rare -- Bugs has the last word. He is the coolest. The hippest. The best that's ever been.


Bugs' humor is sharp, timely and heavily sarcastic. He is fearless, as every heroic figure should be, yet he knows when to pick fights and when to scram outta there.

And Bugs is a man's man. Except when he's dressed in drag. And yes, he has been known to plant big, wet kisses on the lips of his male foes -- but only to exasperate them. Understand? From an early age, Bugs knew what sex was, and was unafraid to toss out a handful of double-entendres in virtually every short.

To challenge the nation's repressive mores was crucial to his schtick. Bugs unleashed real comedy on the land. He was cutting edge. He spoke to audiences, not down to them. He wasn't remotely like that squeaky-voiced pansy, Mickey Mouse. Bugs and his pals at Warner Bros. were the antithesis of the staid, safe and terminally cute characters at Uncle Walt's shop. Put Mickey and Bugs in the same room with only words to fight with, and inside of 10 minutes the mouse would be a grease spot on the floor.

Yet Bugs seldom went looking for trouble -- "I knew I shoulda taken dat left toin at Albuquerque." But once confronted and challenged, he never backed down. When he uttered the words, "Of course, you know, this means war!" we cheered inside.

Because with Bugs you got danger, violence, mayhem. It is not unreasonable, then, to suggest that Bugs Bunny is responsible for the entire baby boom generation's collective sense of humor. Indeed, it's probable. Bugs and his buddies, under the guiding hand of lunatic directors like Ben "Bugs" Hardaway, Chuck Jones and Friz Freleng -- and the brilliant voice characterizations of Mel Blanc -- not only expanded the scope of
American humor, they defined new parameters and dragged all of us along for the ride.

After Bugs, there was no going back.

In fact, we might safely say that Bugs contributed significantly, and in some cases gave birth, to the humor of comedians as diverse (and similar) as Lenny Bruce, Mort Sahl, the early Bill Cosby, Johnny Carson, Richard Pryor, Steve Martin, Eddie Murphy, Jay Leno and David Letterman. Especially Letterman, whose late-night comedy show embodies all the self-mockery, derisiveness, meanness and let's-let-the-audience-in-on-the-joke style of a Bugs Bunny cartoon. To American humor of the past half-century, Bugs Bunny is the guy.

"Saturday Night Live" and "SCTV" are direct descendants of Bugs' lampooning of classic fairy tales. If you saw "Tortoise Wins by a Hare" or "Little Red Riding Rabbit" or "Mutiny on the Bunny" or anyone of scores of others, the rabbit's trashing of famous stories and people and performances was the pattern later used by the likes of John Belushi, Dan Aykroyd, Bill Murray and Chevy Chase.

And Bugs was the master of disguise. So believable were his impersonations that he convinced many a dumbbell he was anyone but Bugs Bunny, causing them serious grief in the process. He would set 'em up, knock 'em down, then giggle, "Gee, ain't I a stinker?"

Elmer Fudd probably got the worst of it, because he was, after all, the densest cartoon character ever. In Bugs' words, an "ultra-maroon." One time, Bugs made Elmer so despondent he attempted suicide by drowning. But Bugs jumped in and saved his life ... then threw him back. ("He don't know me very well, do he?")

Bugs' confrontations with Yosemite Sam were the most action-packed. Sam was like a pit bull. No matter what curves Bugs threw Sam, the tenacious little man kept coming back for more. But of course, Bugs delighted in getting the best of him. Frustration was his specialty.

Another unfortunate co-star was the Tazmanian Devil. All bluster and teeth, the baggy-eyed beast did his best to no avail. After giving it his shot and being bested again, about the best retort he ever mustered was a weak "Why for you bury me in the cold, cold ground?"

But the main event -- the Ali-Frazier of cartoon match-ups -- was the ongoing battle between Bugs and Daffy Duck. Daffy was the rabbit's most formidable opponent, but he almost never triumphed. As everyone knows, Daffy was far too neurotic to win; Daffy was Woody Allen to Bugs' Groucho Marx. Bugs was armed with the self-confidence of George Patton, the wit of Albert Brooks and the intelligence of Carl Sagan.

Bugs' cockiness and anarchic ways eventually landed him in hot water. In the late '70s and early '80s his cartoons -- as well as most of the Warner Bros.' library of shorts -- were the object of witch hunts. "Too violent," proclaimed the self-appointed protectors of American values. So the gunplay and dismemberments and torture were excised from many of his films, gutting them like so much fish.

Bugs, no doubt, found all this snipping highly ironic, since the very people who were calling for censorship had loved his harmless but warped animated shorts when they were growing up -- the only difference being they saw the cartoons for the first time in movie theaters, not on TV screens.

Then one day some bright TV executive (an oxymoron if ever there was one) realized that if, indeed, Bugs warped youthful minds, we shouldn't be listening to these ranting censors, since their minds had been poisoned, too. Thankfully, the hysteria subsided.

It was later learned that the would-be censors had watched too many Disney cartoons -- Mickey and Minnie Mouse, mostly -- and their funny bones had suffered marked deterioration. Therapists prescribed high doses of Foghorn Leghorn, The Road Runner and, when they were finally strong enough, lots of Bugs. To the patients' astonishment, they didn't become crack addicts after the treatment was completed. But they had developed a tendency to laugh at jokes.

Once again, the world is safe for silliness and it is possible to introduce your own children to unadulterated Bugs.

Three out of four doctors recommend it.
Posted by Don at 6:04 AM