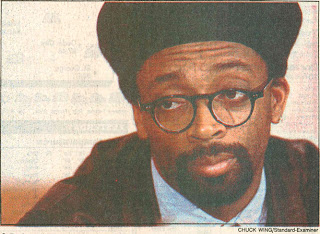 When Spike Lee opens his mouth, these words tend to tumble out. They are not the words of pretense, of artifice. Nor are they the words of confrontation. Rather, they are the language of truth when discussing cultural bias and racism, he says.

Lee, the foremost African-American filmmaker in America, was at the University of Utah Wednesday night, doing the Spike Lee Thing in a sold-out Kingsbury Hall. His audience consisted primarily of disciples, in one form or another, who gave him a standing ovation when he appeared on stage and again, 90 minutes later, when he left.

In between ovations, they listened to him relate anecdotes from the making of his many films, including "She's Gotta Have It," "School Daze," "Do the Right Thing," "Jungle Fever," "Mo' Better Blues" and "Malcolm X."


During a press conference before the lecture, Lee fielded questions from the Utah media, speaking in muted tones that bordered on a whisper. His only previous visit to the Beehive State, he explained, was to change planes at the airport.

The popular image of Lee is paradoxical. On the one hand, he is commonly viewed as a writer and director of exceptional talent, whose provocative narratives have inspired discussion of issues such as race relations and drug abuse. But Lee's pop culture persona -- fueled by his often blunt, controversial statements -- is frequently that of an egocentric attention-hound who may be racist and sexist himself.

"I think that any black man who doesn't shuck and jive ... or do a buck dance or a minstrel show" is viewed by white society as a militant, Lee explained. Further, he said, the distorted image of him created in the media is designed to negate his work.

"The media reviews Spike, and not the film."

Two of Lee's films -- "Do the Right Thing" in 1989 and "Malcolm X" in 1992 -- were dogged by predictions that the films would start riots. Neither one did, but the fact that pundits feared they would rankles Lee:

"I don't think by pointing a light at a problem you're making it worse. ... When any black film comes out, they think there's a potential for violence."

He says movies and television are the primary source of information for a large segment of the population that no longer reads; thus, the responsibility increases for those making films. Lee says he tries to avoid the "positive-negative" philosophy of African-Americans who argue that only positive portrayals of blacks will help fix what needs fixing.

When he was growing up, the native New Yorker said, "I just didn't see the African-American experience on the screen." Instead, he saw the likes of Sidney Poitier playing stoic but often unrealistic characters. Even so, Lee said Poitier was right to do them.

"He had to do those super-Negro roles," Lee said, to advance the understanding of African-Americans in film.

But for all of his fame, wealth and cachet within the industry -- he recently signed a multipicture deal with Universal Pictures -- not to mention his legions of fans and admirers, Lee is quick to point out that he's still an African-American male in a society brimming with racial fear and misunderstanding.

"There are still times I can't catch a cab in Manhattan," he told the audience. "They don't recognize me, and I'm just another potential mugger."

Lee elicited some groans when he answered a question about his feelings on the subject of interracial romance.

"It's my personal opinion, if two people love each other, that's fine." Sadly, he said, often the attraction between lovers is the result of "sexual mythology," and not love.

Then came the kicker: "I don't want you to take this out of context," he said, "but when I see brothers with white women, they're not the slammin' white women."
Posted by Don at 6:33 PM