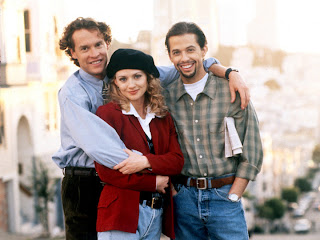 PASADENA, Calif. -- When Jeff Greenstein and Jeff Strauss hear people describe their new show, "Partners," as a "Friends" knockoff, they are both proud and defensive. The Jeffs worked behind the scenes on "Friends," the breakout NBC hit, last season, but say they actually created "Partners" from their own lives.

"Jeff and I have been friends and partners for 15 years," Strauss said at the Summer Press Tour in Pasadena, Calif. "And over the last four years both of us got engaged and then married."

"You know, our feeling is if we have to answer to anybody it's probably our wives and not the people on 'Friends,' " added Greenstein. "We developed this show when 'Friends' was in its infancy."

Strauss explained that the notion of writing what they knew was appealing to them, so they created a show about two 30-ish pals and business partners who find their relationship complicated when one of them becomes engaged to be married.


"Partners" stars Tate Donovan, Maria Pitillo and Jon Cryer as the aforementioned trio. Donovan plays Owen, the more settled half of the male duo, and Cryer is Bob, the annoying partner in the San Francisco architectural firm. Pitillo has the role of Alicia, Owen's fiancee. And you can't emphasize too much the issue of Bob's obnoxiousness; he really gets on everyone's nerves.

"It's just something we'll have to decide on every week, you know, just how far I can go," Cryer said about the level of irritation he'll wreak on his co-stars. "Because I'm just so damned charming. It's industrial strength with me. ... I've succeeded at being annoying. I may have succeeded too well."

Both Cryer and Donovan (a former boyfriend of film actress Sandra Bullock) say they've experienced this same dynamic in their own relationships with women: When the romance begins to turn serious, there has been some jealousy displayed by their best friends.

"I don't ever have any problems with that," Pitillo chimed in. "I just stay single so that no one can steal my boyfriend. I always find that that's a problem.

“The girls don't want him until you've got him. And then they say, 'Yeah, he must be great.' Then they decide they have to go for your boyfriend. … I just found that being single is much safer, to be quite frank with you."

"Partners" marks Cryer's return to series television after "The Famous Teddy Z," a sitcom about the inner workings of talent agencies, which aired for most of the '89-'90 TV season. Critics loved the show, but the public didn't seem to care much about the show's subject matter.

Ever since, Cryer said, he's been apprehensive about getting back into TV. In fact, he was up for a part on "Friends," but didn't get it.

"(The cancellation 0f 'Teddy Z' was a painful experience for me, actually, because I loved the show," Cryer said. "I had a ball doing it. And I got very emotionally attached to it."

After the show was canceled, he joked, he dealt with the disappointment through "the proper combination of drugs." Then he explained, in more serious tones, "Basically, it was very tough for me to get over 'Teddy Z.' I slipped into a real bad, serious clinical depression – which is stupid, because it's a TV show. You know, they make them all the time. It's not, you know, it's not the end of the world."

But Cryer said he started writing a film script (which he said was shot a year ago [“The Pompatus of Love”?]), and did a play in London for a year.

"Working gets you over that kind of stuff."