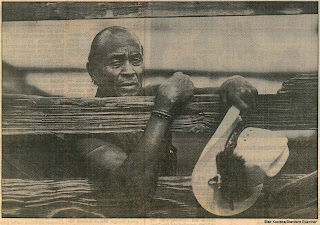 Sometimes in life, you get to meet people you've admired since you can remember. That's what happened with several actors over the few years of the National Western Film Festival in Ogden. One of those people was Woody Strode. I cornered him at the Hilton Hotel in Ogden, and he was gracious enough to pile into a car with photographer Blair Kooistra and me, and we drove around west Ogden looking for a place to take his photo -- and I peppered him with questions the whole time. Finally we settled on some old wooden gates in the ancient Ogden stockyards. What an afternoon.

When Francis Ford Coppola was directing "The Cotton Club" a few years ago, he needed someone to play the small role of the club's doorman. And Coppola, being the persnickety director that he is, would consider only one man for the part -- Woody Strode.

"I can't even see myself in the movie, to tell you the truth," Strode said Thursday as he walked through the Ogden stockyards near the Golden Spike Coliseum. "But you know what I got paid for the itty-bitty part? Sixty-two thousand dollars. Can you believe it?"

To hear Strode tell it, luck like that has followed him all his life.
Born and raised in Southern California, the tall actor has been working steadily in character parts for three decades. Actually, acting is Strode's third career, after professional football and wrestling. In fact, he wrestled many times in Ogden during the early '50s.

"It was such an ugly experience that I refused to talk about integration with Sports Illustrated," he recounted as he leaned over a wooden gate. "They came to my house and wanted me to bad-mouth white people and then go out and make my money from white people. 'No way,' I said. 'Forget it.' "

Strode is not the kind of activist who stands on street corners and campaigns for racial equality. He said he's content to do it in his own quiet, dignified manner.

"I grew up in the far West," explained the 73­-year-old Strode, grandson of a slave. "I beat everything by being an athlete. I've been free all my life out there with Mexicans, Indians and cowboys. We all got along in Southern California. ... I had the good life, and I've got all my money today. No minority ever gave me any money.

"That's how you have to look at this country ­-- it ain't perfect, but there ain't nowhere else like this. We don't even have to look at each other. If someone doesn't like me, I'll just walk over here and we'll leave each other alone."

Strode, who is in town for the National Western Film Festival, perfected the strong, silent, dignified supporting character in such films as "Spartacus" -- as the gladiator who refused to kill Kirk Douglas -- and "The Professionals."He went on to do scores of other films, with directors like John Ford and Cecil B. DeMille, playing the role of the king of Ethiopia in DeMille's "The Ten Commandments."

"I was cast as a slave in that picture," Strode recalled, "which meant five weeks' work. But (DeMille) couldn't find an actor to play the king, which meant only one week of work." Strode explained that he was paid by the week in those days -- 1956 -- so the money for the slave role was better even if the part wasn't as important.

"So they took me in and the old man interviewed me and grabbed my hand and said, 'Son, you're the king of Ethiopia.' I walked out and said, 'Oh, sh--.' So I finished my four days on the scene -- and it's a beautiful scene -- but I'm not an actor. I just wanted to make the money."

Not to be cheated out of the money for the slave role, Strode got a friend in the wardrobe department to dress him as a slave and went back onto the set, where DeMille was directing Charlton Heston. Strode laughed as he related the great director's response: "DeMille looked at me and said, 'Oh, Woodrow, you'd be perfect.' Then he leaned into me and whispered, 'Don't you ever tell  anybody you had two roles in my picture.' "

Although he hasn't made a film so far in 1987, Strode said he has done pretty well in the past few years -- well enough to buy a Mercedes Benz, anyway.

"I've been driving pick-up trucks all my life. But I thought it'd be good to get my young wife (age 22) a nice car."

His last project was "A Gathering of Old Men," a made-for-TV movie. Although he said he was happy with the way the picture turned out, he was disappointed that the producers didn't expand it into a miniseries and run it over three nights.
Posted by Don at 9:24 PM