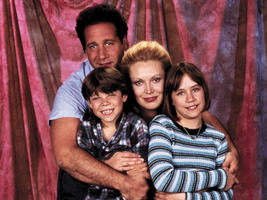 PASADENA, Calif. -- Andrew Clay is the first to admit his career was in the commode.

"I couldn't get a dog-food commercial three years ago," the comedian-turned-actor said. "Maybe it was something I said, I don't know."

Of course it was something he said. His unemployment was due to a lot of things he said: about women and about non-whites, mostly. Andrew "Dice" Clay was a pariah in the entertainment business -- probably the first, and surely the most prominent -- entertainer to suffer significantly from the wrath of the so-called Political Correctness movement.

(It should be noted, however, that even without a p.c. movement, Clay's stand-up routines were so outrageous, so offensive, that there would have been a loud and sustained outcry.)


Now Clay finds himself starring in "Bless This House," a 7 p.m. sitcom (seen Wednesdays on KUTV Channel 2) in the hour traditionally reserved for family shows. Imagine that, Andrew Clay, entertainer of America's youth.

In fairness. Clay's stand-up persona is radically different from his character on "Bless This House." He plays a loving husband – to co-star and longtime friend Cathy Moriarty -- and father, who's a postal worker. Still, the humor tends to be infinitely more bawdy than "The Donna Reed Show."

"There are certain boundaries we won't cross because it'll be in poor taste," said the show's executive producer, Bruce Helford, at the Summer Press Tour in Pasadena, Calif. Other than that, however, "We are definitely going to be grittier, edgier" than many sitcoms, "but I think in those territories that's the honesty of what American life is like."

Clay said he doesn't see his character as anything like an Archie Bunker for the '90s.

"The bottom line is, he cares about his family," Clay said. "And he wants to do better for his family. Even though he never really will get out of that situation, he dreams about it."

Clay said people need to understand that he's older now, and a different person than the young man who made such an infamous splash in the late '80s.

"Now I'm married with two children, miserable like most of you that are married," Clay joked. "But, you know, I sit in the house. I watch the news. I mean, my kid made me bring this," he says, holding aloft a stuffed toy he's been holding in his lap. "He said, 'This is going to help you today.'

"I mean, when I'm not on stage wearing 11,000 rhinestones, you know, I'm home with a kid urinating in my face that's 10 months old, and another one throwing a ball at my head."

The opportunity to play this character, Clay said, feels good to him. Furthermore, "I like the cleanliness of just doing a situation comedy."