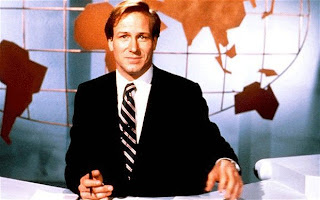 Tom Grunick is the character played by William Hurt. And there are no two ways about it, Tom is a dim bulb. A former sports anchor (not a reporter, since Tom only reads the news, thank you), Grunick anchors the network news on weekends out of the Washington bureau: His hair is neat, he has a friendly smile, he has the ability to read news copy smoothly in front of millions of people. But most importantly, and most dangerously, Tom feigns emotion in front of the camera to add emotional impact. He is a man without ethics.

So what I've been trying to figure out since seeing "Broadcast News" last week is this: Who are the Tom Grunicks of the Wasatch Front? It's great fun to play the game, sitting in front of the idiot box and flipping back and forth between the three local news shows on KUTV, KTVX and KSL.


But before I continue, I must say that in terms of presentation alone, I congratulate these stations for having the best-looking local news shows I've ever seen. Even major markets like New York and Los Angeles don't stack up to the whirlwind, rapid-fire approach and, above all, folksy delivery of Utah's network affiliates. Everyone who sits in front of the cameras on these shows is good looking, and rarely botches his or her lines.

And that's great, the practice of hiring handsome people who read smoothly to deliver the product. After all, most of us don't want to see and hear the TV news read by a great reporter who stutters or has enough nose and ear hair to insulate a small home. We all like to see attractive people on the TV news.

The issue at hand in "Broadcast News," as personified by Tom Grunick, is one of integrity. Are anchors worth more than the people who do the hard work -- the reporters and producers who feed them their lines and brief them before a newscast? And are some anchors nothing more than actors, not newspeople we can count on? Is there anything of substance beneath the veneer? Do they speak from experience as news-gatherers?

Obviously, it would be tasteless and cruel and stupid to begin naming the people I think might be the Tom Grunicks of Utah. Still, spotting the Grunicks in the various weeknight and weekend anchor teams in the state is a fairly easy chore. I've found there are three basic categories regarding anchors.

First, there are the real reporters who anchor. We've seen these people on the street for years, doing interviews and chasing stories. They appear to work an honest day, and are rewarded with weekend slots, morning slots or fill in some evenings. Additionally, there are a few who moved up through the ranks to win permanent anchor spots. These people, more than anyone else, have earned a certain amount of respect from the discerning viewer, even if they aren't as polished or attractive as the big-money anchors (some of whom reportedly make between $100,000 and $200,000 per year).

The second -- and smallest -- group is made up of those who don't pretend to be anything but what they are: news readers. I have a great fondness for these people, because they appear secure in the knowledge that the particular function they perform is important and essential. And this aura of self-confidence makes them graceful, and we enjoy watching them perform.

The third group is composed of anchors who constantly call their experience and awards to the audience's attention. They are the real Tom Grunicks. They are smug in front of the camera, behaving as though they've got the world by the tail. But they always betray their deep insecurities by calling attention to themselves instead of individual stories. It's the, "And when I asked the governor about these allegations ... ," or, "When we first broke the story last night ... " approach to reporting the news -- which isn't reporting at all, but insecure grandstanding.

In the most extreme cases of egocentrism and conceit, they aren't averse to patting themselves on the back for winning awards, trotting out the statuettes and plaques every chance they get and generally transforming their news shows into advertisements for themselves.

So, yes, there are Tom Grunicks out there. But the sad thing is, they'll probably never recognize themselves if they go see the movie. Or sadder still, they'll look at Tom Grunick, notice the resemblance to themselves, and continue the sham each and every night -- and get paid handsomely, too.