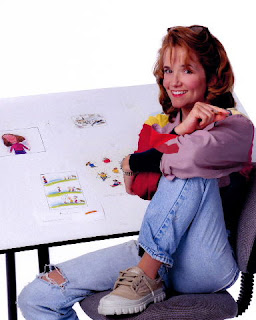 
PASADENA, Calif. -- Lea Thompson is not a professional cartoonist, but she plays one on TV.

In "Caroline in the City" (Thursdays at 8:30 p.m. on KSL Channel 5), as a matter of fact, the NBC sitcom about a successful cartoonist who can't seem to find any matching prosperity in the romance department.

"I do like to draw, yeah," Thompson said at the Summer Press Tour in Pasadena, Calif. "I do cat cartoons. I always did, since I was a little girl." But, she explained, her cat doodles will never be available for public scrutiny.

Thompson, best known as a movie actress from films like "Back to the Future" and "Howard the Duck," is but one of a few female film stars who has taken TV work over the past year; the others include Cybill Shepherd ("Cybill"), Nancy Travis ("Almost Perfect") and Elizabeth McGovern ("If Not for You," rest in peace). Thompson attracted the attention of NBC programming chief Warren Littlefield after appearing in "The Substitute Wife," a made-for-TV movie co-starring Farrah Fawcett. After toying with several ideas, Thompson and Littlefield settled on "Caroline in the City." Thompson said her reasons for migrating to the small screen are many.


"I think there are more opportunities for interesting characters in TV right now," Thompson said. "The women characters on TV are much better than (in the) movies right now. Or have been for the past, like, eight years, I think.

"There's a lot more power to be had, too, if you're a woman. You have the opportunity to be equal with a man on TV, where you really don't in movies right now."

The sitcom star said series TV actually suits her current lifestyle better, too. She's the mother of two young daughters. Working in Southern California is "a little bit easier than schlepping off to Texas to do a movie or something, you know, or going to Chicago for four months.

Thompson grew up in Minnesota, she explained, and so one of her childhood heroes was actress Mary Tyler Moore, specifically of "The Mary Tyler Moore Show," which was set in the Twin Cities. Thompson says she still watches the show, and continues to believe the writing was brilliant. And, she said, it's the kind of show she aspires to do.

"But you have to update it because things have changed, you know: Peoples' sense of humor and the way we view women now have changed. ... She was a little more wholesome than I think I'll be."
Posted by Don at 12:01 PM