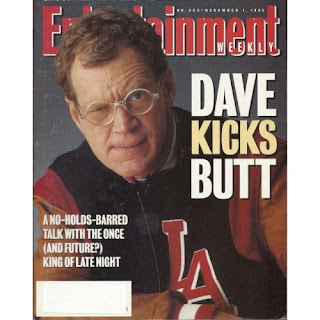 PASADENA, Calif. -- Robert Morton, producer of "The Late Show with David Letterman," was standing on the Ritz-Carlton hotel's lawn in the setting sun, wearing shades and a very expensive sport jacket over a black T-shirt, fielding questions from a gaggle of journalists. And what he was saying was odd.

It's a good thing, Morton said, that Jay Leno got "The Tonight Show" job and David Letterman didn't.

Really? Even given that Letterman was clearly the retiring Johnny Carson's choice, and that he fled the network (NBC) where he had become a star to start anew at another network (CBS)?

"I absolutely think it worked out for the best," Morton explained, "because I think Letterman, in having such respect for Johnny Carson, would never have toyed with the format of 'The Tonight Show.' "

Morton was saying, in essence, that Letterman may well have bellyflopped just like Leno did during the first year or two, looking uncomfortable in Johnny's old digs, trying unsuccessfully to be Johnny Carson II: The Sequel.


"I think it would have evolved, and by this point it would have been Dave's show," Morton said. "But I think he would have done exactly what Jay did at the beginning -- doing Johnny's show.

"How can you show such disrespect, with change, to what Johnny Carson created? I think Jay did it at the right time; I don't think you can slight Jay for going on and doing Johnny's show at the beginning. We probably would have done exactly the same thing."

But Letterman and Morton and the rest of "The Late Show" crew didn't. Instead, they retooled "Late Night with David Letterman" for an earlier time slot, and made their new CBS show, "The Late Show," the dominant force in late-night programming.

Unlike Letterman, who earlier in the same day told TV critics at the Summer Press Tour that he's never watched "The Tonight Show" since Carson retired, Morton said he watches Leno "a lot," and further admits "there's resentment" that many elements of "The Late Show" have, over time, been appropriated by "The Tonight Show."

"Do I think they've done a great job with Jay? Yes," Morton said. "I think the director of the show does a really great job in creating a pace. There's an energy to that show that is much greater than the energy that Jay is providing. I think they recognize what they have in Jay, and they've built a very nice show around him. I respect them tremendously."

Always improvingWhile it's true Leno's been closing the gap, he's still won only one week in the ratings in almost two years of head-to-head competition -- this even though Letterman has about 10
percent less of the stations in the country playing his show opposite Leno's. But being on top, Morton says, doesn't mean "The Late Show" is without its shortcomings.

"But, you know, I refuse to recognize that it needs work because Jay Leno's looking any better; that's not a reason. It's a personal quest for excellence; you know, we want to top ourselves every night. And when you do so many shows over the course of 13 years, it's very hard to top yourself night after night. But you know something? (Letterman) always does."

''The Late Show" has evolved into a less caustic, more mainstream comedy show -- resembling more the traditional talk show format than Letterman's old "Late Night" approach, which was definitely an anti-talk show that sought to mock rather than embrace show business. Morton's explanation for the not-so-subtle transformation goes like this:

"It's very hard to be, as Letterman is 47 or 48 years old, making the kind of money he's making and being, really, the face of CBS -- I mean, this is a man who is the brand identity, he is the man behind the 'eye' here at CBS -- it's very hard to be the anti-show. I think he had to grow up. And I think that the transition he made from being the anti-talk show to what he is now was smooth.

About the movie clips

One of the things Letterman's doing now is including movie clips during interviews with stars, something he almost never did back at NBC.

"It's not natural for him to go out and hawk a movie," Morton allowed. "It's not a natural thing for David Letterman. He still has feelings about show business that aren't those of Merv Griffin, who'd say, 'O0000, you're in "Baywatch."' That's not Letterman. You're never gonna change the guy, but he also understands his role at the network and understands his role in late-night television. He's the guy.

"And it's also because of the competition; we're competing for the top guests and to get them first. You know, when the Leno show says, 'We'll give you a clip, and 10 minutes and you'll be the first guest out,' they then come to us and say, 'Well, Leno said this, and they'll give us this and that. What do you have to offer?' So, it's a competitive marketplace; you have to sometimes run the clips even though you don't like doing that."

Every little thing about "The Late Show" is analyzed to death by the show's star and staff. Making things look as though they are spontaneous on the air is a tough, meticulous job.

For instance, Tom Hanks is one of the show's favorite guests. Why? Because he works hard to plan out his segments with Letterman beforehand.

"Here's a two-time Oscar winner who will get on the phone with a segment producer on our show writing an interview for an hour, saying, 'I don't think we should talk about that. I have a better story if you ask me about when I worked for the country club with the golf clubs,' " explains Morton, recalling the now famous -- among Hanks fans, anyway -- incident with comic Slappy White before Hanks was performing for a living.

Morton's boss feels the same way. "He comes on our show like a first-time comic and each time -- he comes on, like, a couple of times each year -- he blows the roof off the dump," Letterman said. "And I have endless respect and admiration for a guy in his position
who is willing to do this. So, who do I think is funny? It's Tom Hanks."
Posted by Don at 6:33 AM